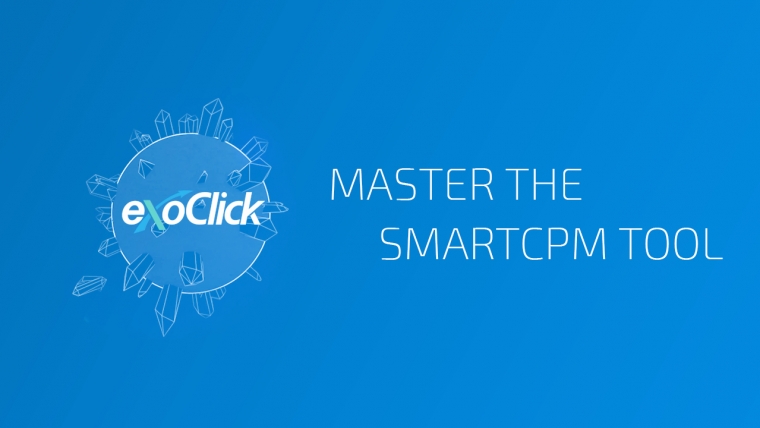 This isn’t only because of how huge they are but also because of the quantity of data they provide.

That means you need to invest a lot of time on statistical analysis and on building a proper strategy that’ll allow you to compete with all the other advertisers.

I’ve been working on ExoClick on a daily basis for more than three years.

I’ve had the time to test several different strategies in order to find the best one.

SmartCPM lets you insert a maximum bid that you’ll normally never pay, unless you have the minimum bid.

In fact, what you’ll pay is based on your next competitor.

By doing this, you guarantee your position at the lowest possible cost.

This tool comes in handy if you’re looking to save money.

Even so, this isn’t all it can do for you.

Indeed, using the Smart Bid, you can actually know your competition, how much they’re bidding, what’s the cost of the first position, what’s the variation of the competition (if they’re using day-parting for example).

You can even damage your competitors if you feel like it.

It’s only a matter of knowing how to use it properly.

That’s why I’m giving you some tips about it that’ll help you rule over this ad network using SmartCPM.

Apart from giving you the ability to know the next competitor, the SmartCPM also lets you see if someone overpassed you.

You can tell me that this is good because you have the traffic at a lower cost.

The problem is I lost traffic.

Someone was stealing my traffic.

I know that because my impressions, as well as my CTR, dropped.

The CTR drop means that the quality of my traffic went down.

It’s also possible to do some damage to a competitor’s campaign.

Let’s say that you’re aiming for the first position with a maximum bid of 6€, just like on this example:

Here you can see that I’m paying an average of 4.4€, meaning that the next competitor has set a bid of 4€.

If, on my campaign, I’m paying too much because of him, we can play the same game:

I’ll create another campaign or even keep this one with a bid of 3.6.

With this, I’m forcing him to pay a value close to his bid, therefore increasing his costs.

By doing this, I hope he’ll leave the segment.

This is how you play on ExoClick using the SmartCPM tool and becoming the advertising network master!

It’s also possible to know what you need to do in order to get the first position.

Even if I cannot “afford” it now, it’ll be a reference for the future.

You can put a really high bid (20€) with SmartBid and check how much you’ll pay.

Remember to not keep the campaign running, otherwise you’ll risk losing a huge amount of money if you ultimately can’t monetize your traffic.

Let’s say that, if you pay 2€ with this test, you’ll have an idea of how much the first guy is paying.

Note that the effective CPM, CTR and impressions are the same.

Another good use of the SmartBid is to duplicate one campaign.

You do this by putting only good websites there as well as a higher bid.

This ensures you have a more competitive position for the websites that “deserve” you pay more for them because their performance is far better than all the other ones.

The problem is: you pay around 0.66€ on the whitelist campaign.

That means that you’re in competition with yourself and you only pay this value because of your RON campaign.

In this case, you can take the websites off the RON, keeping them only on the whitelist campaign with a higher capping (to guarantee a bigger “presence” there because it’s worth it).

Wanna know more about how to play with whitelist campaigns on ExoClick?

It’s important to keep an eye on the changes you make and understand their impact.

My personal advice is to keep track of the dates in which you change something.

Later on, I needed to check the impact of this change; the before and the after.

In fact, they’re constantly excluding websites, paying more for the best ones, etc. SmartBid allows you to know this and act accordingly.

For example, let’s say you have a RON campaign.

On one website where you’re performing well, you’re also paying more and closer to your bid which means competition is high.

It would be a good idea to consider treating this website differently and to think about creating a campaign for it, allowing you to bid higher.

Here, you can see that the fourth website on the list has a better performance (more conversions comparing to the costs) but I also see that I’m paying more.

Therefore, the good performance I have is not only for me but for other advertisers and we’re all fighting for its traffic.

The carriers don’t have the same cost. That’s normal:

The quality is not the same, the carrier rules are not the same, and the offers available on the market will influence the competition.

If you have a campaign that is targeting all carriers, the difference of cost will be clear.

Let’s imagine you have a campaign that targets all carriers but you happen to be paying a lot more for one of them in particular.

Then, you should consider creating campaigns for this carrier specifically because, clearly, it’s more expensive and it’s not correct to have them all together.

Most of the times, when the price is higher, there are better solutions.

That’s why we need to be more competitive.

These are some of the considerations you should take into account when working on ExoClick if you’re using the SmartCPM bidding system.

This type of methods is to be taken into account if you really wanna increase profits in this hyper popular advertising network.

I hope my thoughts on SmartCPM can help you boost your revenues on this ad network!

I know you can be the ultimate ExoClick super slick master!