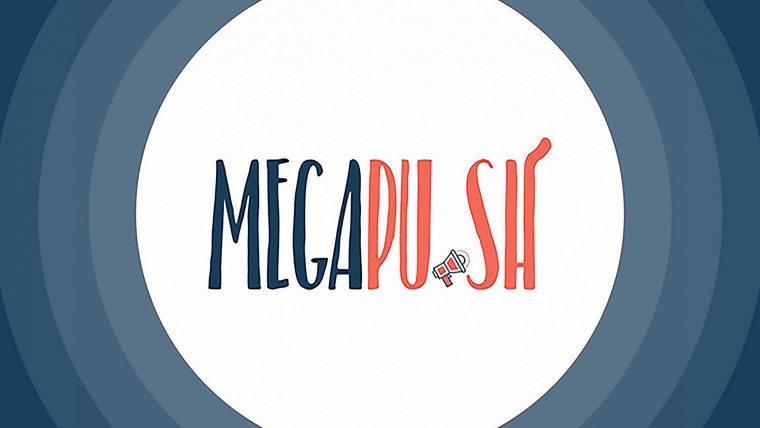 Nowadays you probably won’t find a single affiliate or media buyer who wouldn’t be aware of push ads.

2018 became a year of pervasive excitement of this new ad format. Many media buyers were trying it out, and for some it evolved in their main ad format.

It’s certain that push will stay popular in 2019, too. There will be even more traffic sources, and interesting cases, and for us, there will be more profit!

In this article we will review one of the first ad networks specializing in push notifications.

MegaPush was created in 2017. For a time it was operating privately and later was rolled out to the public. The network then began to gain popularity quickly due to the big amounts of affordable and high-quality traffic it had to offer.

MegaPush provides a tremendous amount of traffic in virtually all countries of the world.

I first heard about this network in the beginning of 2018, and since then I was testing their traffic for dating, sweepstakes, nutra, and gambling.

I can say that MegaPush is growing and developing rapidly. Its functionality and interface are being enhanced too.

It has not been long since global changes were introduced on MegaPush to make the interface even more user-friendly.

Some functions, which refer to targeting, have also been elaborated.

From this MegaPush review you will learn how to create campaigns and optimize them.

The statistics about the current number of active users, number of impressions, clicks, and average cost are presented right on their homepage.

Push traffic is still novel. So few users have developed banner blindness to it. That’s why it is being actively employed by many media buyers. It results in regularly updated and newly published case studies.

Of course, there is no use in replicating a case, but certain effective approaches can be adopted and tried out.

How to Create a Campaign on MegaPush (Step-by-Step)

Prior to initiating campaigns, a new source of traffic must be added to the tracker.

For now, the network supports the following parameters:

In my case, I use Binom tracker. You can read a review on it here.

The setup for MegaPush is the following: 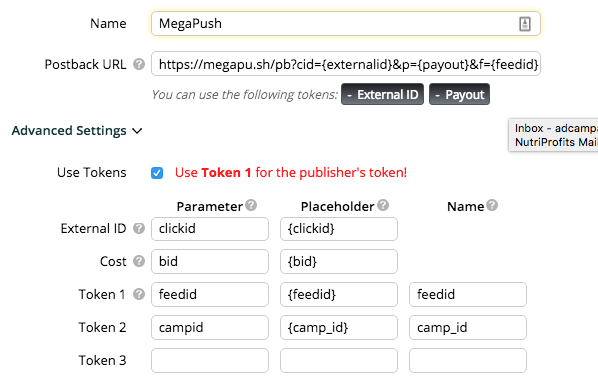 Note that MegaPush interface allows passing the postbacked sales and checking the conversion rate statistics, plus the campaign profitability. I take advantage of this useful function too.

As you can see, we pass few tokens.

Feed denotes online markets or traffic sources that can be deactivated. They will be described below, in the Optimization section.

Everything should be clear and self-explanatory here. So let us start filling out the form step by step:

Country – select a country for your campaign; in this case Germany is selected.

Device – select either mobile or desktop; I have selected mobile.

Link – an offer link, or if you create Call or SMS, this field will be populated with a phone number, accordingly.

Title (The maximum length is 30 characters) – the title of a creative should be entered here, and it cannot exceed 30 characters.

Message/Description (The maximum length is 45 characters) – the creative itself up to 45 characters long is to be entered here.

Note the grey smileys in the fields Title and Message (on the right), this is where you can pick emojis, add them to the text, and thus attract more attention to it.

I suggest trying different kinds of creatives, both with and without emojis, with longer and shorter text messages, with different images.

If the creative provides an impression of it being not occasional, the possibility of user reaction to it is higher.

Tip: to increase the campaign CTR, I recommend using different images for both icon and main image.

By the way, once you have introduced the Title, Message, and Image fields, you will see in the center of the screen a preview, so you can have a better perspective on how the creative will look like.

Campaign name – the name of your campaign.

Mobile carrier – you can target an operator for campaigns with operator traffic. 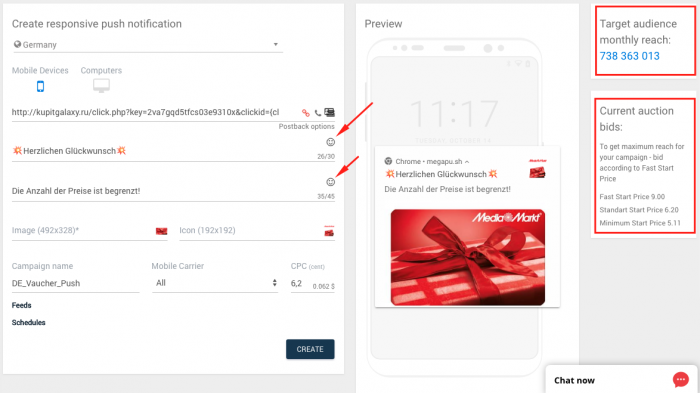 At this point, you can finalize the creative by clicking “Create”.

I must also say a few words about some additional parameters you may need later. They are located in the Feeds and Schedules section.

Feeds – You can select the feeds you want to work with.

Schedules – You can set up the budget and click thresholds and also schedule the time to launch and terminate the campaign.

The budget should be discussed specifically.

As for the budget limit, it can be exceeded due to the specifics of Push notifications technology.

So, the system sends the push notifications to the users. Then, some of the users open the messages right away and click the link (and you are charged for the click), whereas others may open the message an hour or several hours later.

If you work with a large GEO targeting area with lots of users, the campaign may have already been paused, but the traffic is still being received.

It will consist of the users who click on the links in the messages sent earlier.

On the other hand, if the budget limit set up is too low, it will slow down the deliverability and result in little traffic.

Moderation does not take much time during working hours. So the traffic starts being received almost immediately after you launch a campaign.

It is recommended to post several creatives to see which one of them will be more efficient. Also, the more creatives you post, the more traffic you will receive.

However, keep in mind the limits, because there is a lot of traffic on MegaPush.

MegaPush campaigns can be optimized with the following parameters:

I recommend testing different approaches in the creatives. In my case, both shorter and longer texts work well.

Texts can feature emojis and a city macro which varies depending on the user’s IP address.

A campaign with zero or negative profit sometimes happens to be optimized and made profitable by suspending it during the prime time, and resuming when the competition is lower.

An important function which is extremely useful (but not easy to find if you are not aware of it) is the mass change of the bid.

To change the bid for several campaigns at once, you need to select the country for which the change should be made (in my case Germany).

After doing it, the “Price Change” button will appear. 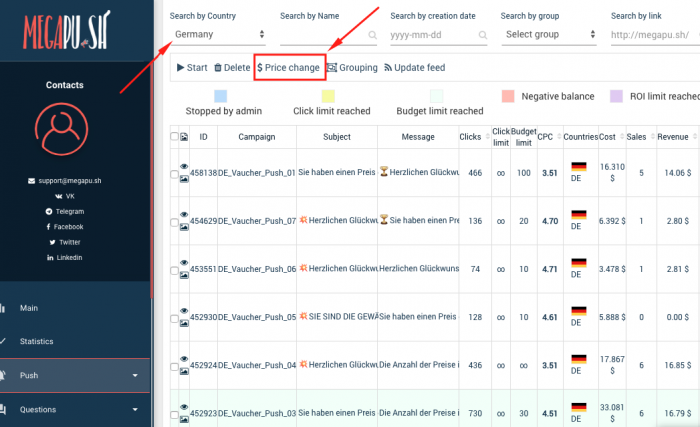 Select the campaigns to apply the changes and click on “Price Change”.

A new window will open. It lets you choose the type of devices to make changes and enter the Minimum, Average, and Maximum bids.

I recommend trying different bid amounts to see how your offers perform at the minimum and maximum bids.

Time and day of the launch

This parameter should be tested by the long run, but first you should predict when the user can be most loyal to your offer.

For instance, if during the working hours he happens to see on his phone an advertisement of a dating website, most likely he will just close this ad. But in the evening or at weekends, the same person may be more loyal.

The feeds can be activated and deactivated at your discretion.

At the moment, there are more than 50 active feeds in the system.

They are classified as follows:

MegaPush is notable for the quality and volume of traffic. If the offer is thoroughly picked and the creatives are elaborated, there is a good chance for quick optimization of the campaign.

There are some complexities in the interface, but they are just a matter of getting used to.

The system is continuously updated with new features being added.

It has not been long since Push polls were introduced. They are Push notifications in which the user can respond to a question using one of the provided optional answers.

Such interesting features as Push SMS and Push Call have been recently added.

Unlike the regular Push Notifications which redirect the traffic to your website, these notifications create an SMS or initiate a call, respectively.

All things considered, MegaPush is a network to be definitely tried out. It will suit any offer and GEO.