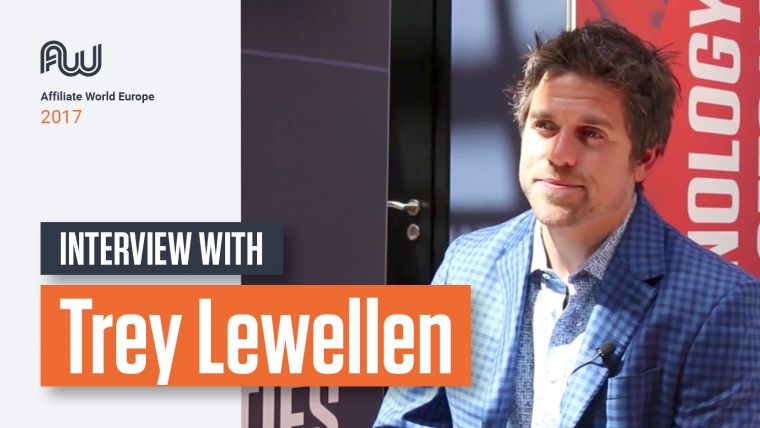 Understand Why Trey Lewellen Is Passionate About Finding The Right Product! [Video]

When it comes to Online Business, there are a whole lotta folks out there who claim to be masters of their craft.

However, most of them fail to give you what you need and leave you feeling like they weren’t born to succeed in the online marketing realm.

Have you met Trey Lewellen, the guy behind LumiTact tactical flashlights and a super famous Masterclass that takes you from online marketing zero to hero?

Then you’re in for a treat because we were able to chat with Trey at Affiliate World Europe!

Ready to watch the video of our rendezvous?

Check it out, then!

I’ve been in Internet Marketing for about four and a half years.

Really going on to 5 years now.

Not knowing what the hell I was doing.

And you just kind of start to feel your groove.

You start to get in it, right?

I started off with loan office leads, with CPA Facebook leads and then – from there – I built up a fan page, a fan base of raving fans…people who enjoyed what we enjoyed , which was shooting guns, buying ammo, being a survivalist.

And my brother was gonna be a police officer and I was in insurance.

I went to him and I said:

“You know, I don’t wanna see you come home in a casket, I really don’t.”

It gets me emotionally upset just to think about that because that totally could be the reality for him in his profession.

So we did that.

We started a fan page around his niche, around what he loved, around his passion.

My passion is in marketing.

I absolutely live it.

I have dreams – to this day – about marketing.

So we started there and we built a big fan base of raving fans who then started buying t-shirts.

We started selling t-shirts until we launched this t-shirt, a really good t-shirt and a guy in the comments was like:

“You know, you guys sell really good t-shirts but my wife says I can’t buy anymore.”

So we listened to that.

And so we moved into the physical products.

“WARNING: Due to price of ammo, there’ll only be one shot. No warning shots.”

Somewhere in there the flashlight kind of came about and we did everything right.

It was like the perfect storm of the g700.

And then it just grew.

It is what it is today.

That flashlight was in my closet for six months.

Did I know a multi-million dollar product was in that closet?

The only reason that it ever hit the market was because I literally tripped over it.

“I need to sell these damned things because I keep tripping on them.”

They literally had cobwebs on them.

We built a little page, put them online and they started to sell.

The rest is history.

In our mentoring…so we mentor people…they come to us with the same question:

And here’s what I point out to them:

Because I tell you that when we go and get offers of other people and look at the copy, the copy is good.

Related: How to Write Banner Ad Copy in Different Languages

But we have to change it a little bit to talk to our audience, because we understand our audience so well and that’s what gives us that pop in conversions.

If we just copy and paste it, it doesn’t speak to them just right.

It’s almost like we have an accent when we just copy and paste.

But to not have the accent – to speak to them one on one, knee to knee – we give it our little taste; our own kind of creativity and that’s because we’re in the niche, we understand it, we know it, we live that.

So, if there’s a vertical they wanna choose, choose something that they understand and that they can talk to.

As an affiliate marketer?

Because when you have an offer that does what the g700 does, you need to make sure everybody dots their i’s and crosses their t’s, because it becomes very chaotic very quickly.

When you have a four-man crew it’s hard because then there’s the back stuff.

So, there’s a lot of that on the back end, like the customer support issues that you have to make sure are in place or that you can build quickly to make sure that your boats keep sailing.

Without talking to people, you will sink.

This ship will sink.

Without customer support, this ship will sink.

Without listening to your customers, the ship will sink.

Affiliates don’t have to do that.

They have their own things too, of course, but – in the offer world – that’s what we’re doing.

We’re keeping everything mixed together and keeping it all held so that they can push the money towards the offer to make it keep singing the way that it does.

“Absolutely. I will run that.”

I understand it, I get it, I’m doing it and boom!

I just give them a big thanks and a big appreciation because I’m thankful.

Because – if they didn’t exist – our company wouldn’t be where it is.

And the same thing vice versa.

If we didn’t exist, they would not have made money with our offer.

It’d have been a different offer.

So there’s that tie.

5. What’s Your Definition of Success?

I guess that, on a 30.000-foot view of success, success is meeting your goals.

But I think that’s where a lot of people make their first mistake:

They always have their eyes set on that big goal which means they never celebrate the small successes leading up to it, which tells the brain not to be thankful when it’s achieved.

So what does that mean?

A small success can be going out for ice cream and saying:

Those are all successes.

And when you celebrate those small successes, the big success is a huge win, because your brain understands all the successes that took to get to that big win.

Versus the burnout that happens when all you’re looking at is that big goal.

I think that – if I was gonna see that there’s a trend in affiliate marketing – is that a lot of them are loving the recurring.

So they’re wanting the recurring pieces.

But the other thing is that affiliates are very smart people.

And they understand now that it’s becoming easier to build the funnel, to sell the product than it is to run an offer, because the biggest negative about being an affiliate is that they’re not growing a company.

They’re not growing their own database, they’re growing someone else’s database.

And as soon as that offer dies, they’re unemployed until they find the next offer that works.

We had that same thing happen to us.

That was a big lesson early on.

We were selling shirts.

As soon as the shirt hit went, we were unemployed, until we found the next one.

So with affiliates the biggest trend is them understanding that it’s time they build their own database.

“I think it’s time that we build a company for us instead of for someone else.”

And because they know how to run the traffic, they start building their own offers…and that’s where they’re headed.

7. What Do You Think of Mobidea’s New Affiliate Tracker Software Capabilities?

We were an open book.

We always have been.

And I’ll be the first to say that the affiliate world is a dark world.

And what I mean by that is – affiliates care about themselves and that’s okay.

They take themselves first.

If they don’t trust you, they’ll move to somebody else.

If the other guy has another dollar that they can get, they’re gonna go to them.

Saying that, with the data that you can give affiliates…by giving them more information, I think trust is gonna become a big part in the affiliate world because this guy is an open book.

He’s not gonna screw me.

He’s gonna make sure the pitch is always placed, the conversions always show the same versus the guy saying:

“I don’t know. I’m not secure about this offer. The trust isn’t there. I’m gonna move my traffic because it doesn’t seem like I’m making conversions like I was yesterday.

But when you have more data, trust follows.

And when you have that, I feel that – as an organization, as a community, and as just all of us being together as a congregation – it’s all stronger.

Because – with that – we can have that trust which leads to more success on both parties’ ends:

The affiliate’s end and the offer’s end.

“You are showing me the right data. You’re right. That does work. Holy smokes.”

8. Greatest Qualities of an Affiliate Marketer

That’s amazing because – growing up – I was always told that if you watch your pennies, the dollars will watch themselves.

They understand that because they’re okay spending four cents to make five cents.

They’re ecstatic about that.

That was an eye-opening event, right?

They’re okay scaling at a penny level because they know that – at a scalable penny level – they’re gonna make the dollars turn into millions.

And it’s just like…that was huge.

To know that and to understand that.

So right now we currently have something new coming up.

Affiliates are loving it.

But here’s the thing:

A lot of people were late to the g700 push, and they missed it.

Don’t miss this one.

Because we have something big.

It’s gonna be hitting the market.

What a cool interview that our affiliates are gonna enjoy for sure!