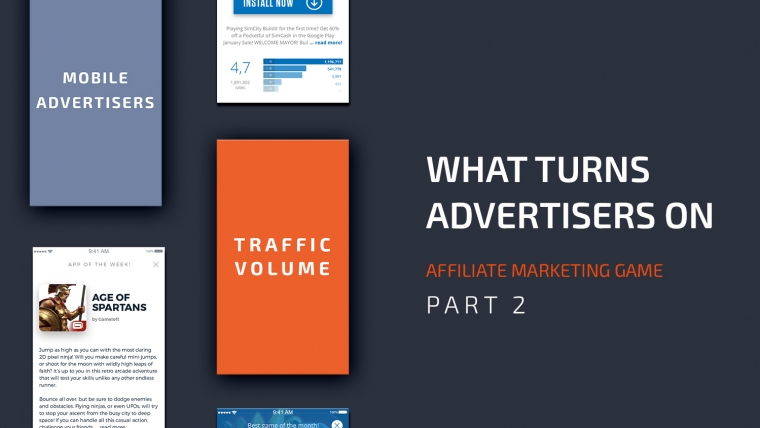 Did you read the previous chapter in this series about all the things Advertisers expect from your CPA/CPL traffic?

I hope it was useful for you!

If it wasn’t that helpful it’s probably because the models alluded to aren’t really related to what you’re doing.

In this article, you’re gonna understand how to become a CPI connoisseur!

Stick around for the revelation of more great info that’s gonna make you a recognized, award-winning expert in the affiliate marketing field!

Nowadays, most people use apps every day to perform various activities.

It can be an alarm clock app, a weather app, or a social media messaging service.

Apps are now part of almost everything in our lives.

Advertisers are obviously aware of the volume of app users.

Cost per Install (CPI) consists in the advertiser paying the publisher every time a user installs and opens their app.

In fact, it has been steadily stealing the thunder from both mobile subscriptions and PIN submits.

Just like what happens in CPA, developers are only paying when the user performs a specific action.

This allows advertisers to measure their customer acquisition costs.

When an app developer decides to advertise their app in a performance marketing basis, they can either go for CPA or CPI.

Attention: bear in mind that the definitions of both CPA and CPI are very controversial and are always evolving.

In order to save some of your precious time, I’ll assume CPI stands for the cases where the conversion happens when the user installs and opens the app.

As for CPA, let’s assume it stands for those offers where the conversion takes place when the user purchases something inside the app (as is the case in regular Mobile Subscription offers).

Ready to check an example of CPI and CPA that’ll clarify things for you?

Let’s use a game as an example, then:

It’s important to understand why advertisers choose one over the other:

The way an advertiser approaches CPI differs from the way he perceives CPA.

It may sound weird, but advertisers aren’t always looking for committed users.

When an app has a high number of installs, it goes up in the Google Play/App Store ranking.

This gives advertisers what they’re ultimately looking for – visibility to reach organic users.

In this type of traffic, users need to install the app to either get some reward in a game they’re playing or be able to see some type of content.

What does this mean?

Basically, it means that incentivized users are a way to get to those cool, money making organic users that won’t be forced/lured to download an app.

This way, developers will pay for the initial downloads only as bait for the real users they’re looking for and that’ll be acquired for free.

Nonetheless, if advertisers want real paying users instead of just many users to go up in the rankings, they’ll become more demanding with the quality of traffic.

They need to take the LTV (lifetime value of the user) each publisher delivers into account.

Why? So they can select which ones they want to see promoting their products.

At the beginning, advertisers may lose some money until enough time has passed for them to be able to analyze the long-term value of users they’ve lured via CPI.

Let’s take a look at this example. 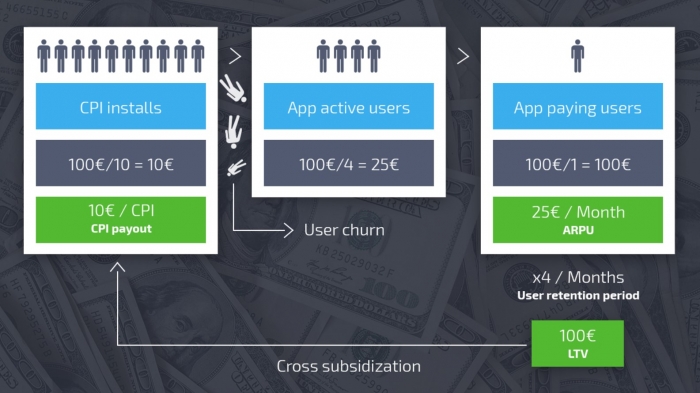 Here, the advertiser opted for a CPI of €10 after gathering enough data on their LTV.

For every 10 app installs, only an average of 4 became active users of the app.

From those active users, only an average of one user became a paying user.

Spending around €25/month on the app (Average Revenue Per Paying User or ARPPU) for an average of 4 months (user retention period), the users of this app have an LTV of €100 (spending €25/month during 4 months means a total spending during the “lifetime” of €100).

The LTV divided by the initial number of installs indicates how much the advertiser should spend on each CPI payout (€100 divided by 10 installs = €10 CPI).

Advertisers may want your users as pure bait.

Even so, they’ll be happy if even those turn out to be active, paying users!

Good quality traffic is always the most important metric to take into account if you wanna make advertisers smile.

Advertisers usually want to see the affiliate IDs that generated each click on the banner.

This way, they can ask the affiliate network to cut that specific source of bad traffic.

They often also set a cap.

So they don’t go over the budget destined for that specific campaign.

Ever heard of affiliate fraud?

It’s a real nightmare and the thing that worries most CPI advertisers.

They can decide to block you as a source of traffic if:

Please be aware that many websites/companies that promise cheap app installs for apps are mere fraudulent schemes that can raise flags about the legitimacy of your traffic and get you banned from sending traffic to CPI offers.

Indeed, fraud is a gigantic bane upon us all. It has caused a lot of restrictions in the market and forced advertisers to start analyzing new indicators.

One of these is KPI (key performance indicators). KPI can be a specific retention rate, reaching some level in a game, or purchasing something.

If you’ve read the first part of this series, I’m sure you’ve been able to understand that volumes are a CPA advertiser’s first and only real love.

When we talk about CPI advertisers, it’s exactly the same thing.

Now let’s think about how CPI advertisers can get higher volumes.

What am I talking about?

Users that install the apps and become paying users.

Advertisers can use KPIs such as:

Advertisers are super important parts of the game and I know that – after you’ve read these two cool articles – you’ve become fully able to understand why!

I really hope this article helped you dig out the deepest secrets of the CPI game.

In this honourable mission, they’re gonna need a whole lotta awesome affiliates such as yourself!

If you’re still asking yourself what’s the deal with CPI and CPA, don’t hesitate and check out our article regarding these two price models.