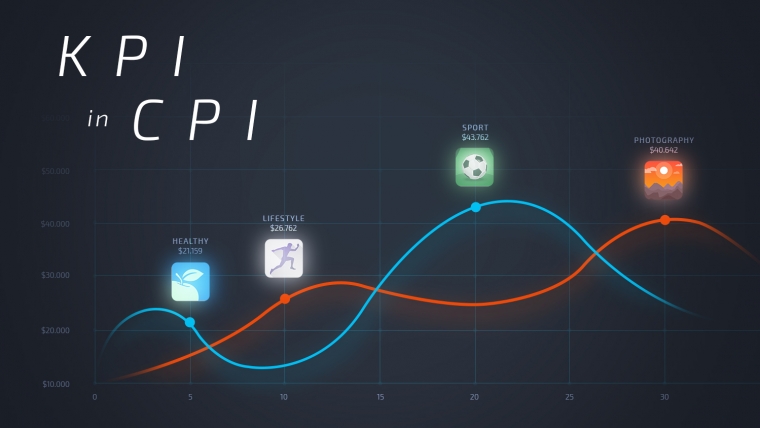 Ready for our article about Key Performance Indicators? Let’s go!

It’s an already mythical acronym standing for “Cost Per Install”.

It’s now starting to be quite popular in our digital marketing lives.

These are the kind of campaigns based on app installs.

New offers are dynamically appearing every day and advertisers are eager to acquire more users and enrich the mobile experience.

They WANT YOU to promote them!

Most of these CPI offers have the following conversion flow:

The user installs and then opens the app.

That’s how you acquired a new user to your campaign!

It’s a pretty interesting market since it’s been producing a lot (A LOT!) of income every year!

Affiliates and Developers – What Do They Want?

Now let’s think about something.

What do affiliates such as you and I want?

A lot of revenue, consistently pouring into our accounts like a tropical waterfall!

This also means we want, need and love a whole bunch of cool conversions!

What about app developers and our advertisers?

They want loads of new users for their product.

Then, they wanna make the most of every acquired customer’s LTV (lifetime value).

This translates into in-app purchases of all sorts and other revenue streams such as advertising, “extra health”, virtual currency, etc.

This is what developers started thinking about: maybe app installs are a done deal.

No need to worry about them anymore.

Perhaps it’s the quality of this traffic that must be explored.

Therefore, developers came up with a solution to increase this parameter during user acquisition by setting KPIs in their campaigns.

What the heck is a KPI, anyway?

Are there any books on key performance indicators that can teach you what it’s all about?

Is it something that can help you find out how to develop performance metrics?

It’s one of the most popular types of performance measures.

KPIs may appear in all sorts and shapes.

Indeed, they were created so as to suit the needs and goals of developers.

One of the most common KPIs is Retention Rate which means you’ll be asked to guarantee a certain number of active users for a given period of time.

Here’s an example: the Key Performance Indicator is that 30% of new users (or installs) access the app on day 1 (one day after the install). That’s the aim.

How to accomplish such a mission?

By using our most legitimate and trustworthy traffic.

As the majority of campaigns with KPIs are non-incent ones – non-incentivized installs are generated due to a more genuine interest of the user – it does sound like an accomplishable mission here.

Summing up the general idea, it’s simple to say that Key Performance Indicators are quality targets.

In addition, always remember to ask your advertiser how the Key Performance Indicator performance affects the offer in terms of your payment.

As it’s another risk factor, it’ll help you decide whether or not to run campaigns.

However, in some offers, you just know you’ll be able to perform.

Take chances, do your best, and win like a super pro gone cash-crazy!

At times, KPIs can also be very specific types of performance measures – in opposition to more general KPIs.

Let me give you another real-life example for you to understand.

This is something you don’t get to check in regular books on key performance indicators: imagine there’s a personal ads (buy and sell) app wanting to do a non-incent campaign.

That’s it! That’s how you rock one of the most widely used types of performance measures to ascertain a campaign’s success!

Wondering what other uses a Key Performance Indicator has?

They’re useful for optimization, for instance.

Imagine that – this time – we have ten of your own affiliates running CPI campaign X (where X is the campaign’s name), which requires a Retention Rate of 15% by day 2.

We have been informed by the advertiser that 8 of our publishers are delivering this kind of quality, but 2 aren’t.

Instead of asking us to stop the whole offer, we’ll be able to pause only those 2 and continue running X.

Now imagine these other 8 have been delivering a great quality on that same offer.

Instead of the required 15%, they’re getting an average of 40% Retention Rate after 2 days of installation.

It’s highly likely that our advertiser will ask us to increase traffic while also providing a motivational payout increase.

This means KPI can be one of the hyper-useful types of performance measures!

It’s also gonna be profitable for affiliates, which is even better!

It’s really all about the quality we can deliver.

That’s where the money is generated for our app developers.

What will that generate, then?

It’ll make developers keep on producing new apps for us to promote and monetize.

Quality means we’re getting richer on an ongoing cycle.

So we’re glad to keep that up in all the ways we can.

KPIs are one of the best types of performance measures.

Because they allow us to measure quality, and to optimize the traffic excellence we deliver.

In many ways, this is a pretty good thing.

Even so, you have to always remember the golden rule of intelligent business:

Always ask your advertiser about Key Performance Indicator’s results affecting payments or not.

You’ve learned what Key Performance Indicators are all about.

Now you know this is one of those types of performance measures that gets the job done!

Quit sitting around and let’s start moving and making some of that capital rain!

Let’s get out there and promote these apps, driving them to users’ phones and tablets.

Now you know how to develop performance metrics!

This means you’re ready for the game!

I’d also suggest you read some books on key performance indicators to learn even more!

Until we meet again:

Over and out, ‘cause money is what it’s all about!