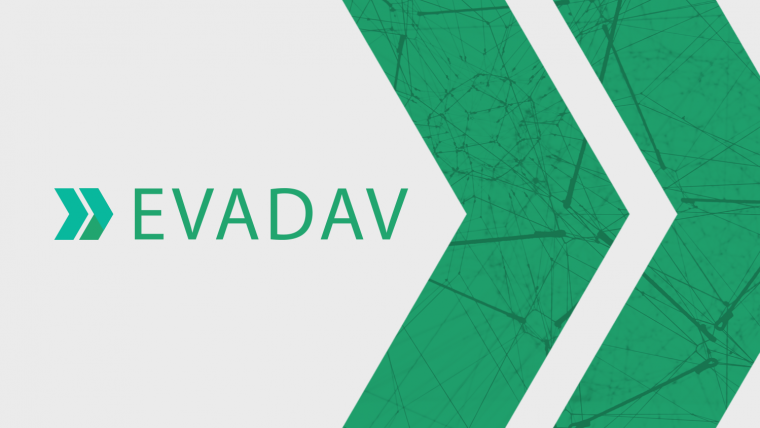 Another day, another fresh review from our series of Push notification Ad networks.

This time, we’ll have EvaDav review – a push Ad network that combines effective solutions for both Advertisers and Publishers under their platform.

At the beginning of 2019, I’ve already been working with EvaDav for some time. Back in those days, I heavily tested Sweepstakes, worked with Dating, Casino and Nutra offers, and some of my campaigns were running on their traffic.

So, when I started to prepare this review I simply found my old credentials and logged in to EvaDav platform again. In a few minutes, I was already scanning my old campaigns and creatives with a strong desire to make new tests on EvaDav traffic. But this time with some new offers and new media buying technics I’ve learned in the meanwhile.

Besides my own personal interest, a manager who is assigned to my account kindly suggested to help me with campaign optimization, and more importantly, gave me a few recommendations of best-fit sources for my campaigns.

But before moving to the actual campaigns, let me share with you a brief intro about EvaDav.

EvaDav is not a new player on the market. For quite some time, they’ve been selling their traffic via RTB to other push ad networks.

At the end of 2018, they diversified their business from RTB and started selling their traffic to everyone. Today, along with their own traffic they also sell traffic of their partners.

However, their main focus is still on their own Push data-bases.

As far as I’m aware, EvaDav has a separate department that actively purchases push-subscribers from various sources. They also actively attract publishers who could sell them push subscribers.

At the same time, the quality of traffic is controlled by an anti-fraud system designed specifically for this project. And you can be sure that your traffic will come 100% from real users.

Among other advantages, I’d like to point out that EvaDav provides targeting by over 30 different parameters. This fact can not stand aside if your goal is to find a well-matching audience for your offer.

And, of course, some numbers:

The last point here is that guys from EvaDav are constantly improving their platform, refining functionality and adding new features.

As an example, just recently they added a new Ad format – Popunder.

Learn more: What is a Popunder Ad & How to Use It

But no more description, let’s get down to business!

Now, I’d like to show you in practice a few features they guys from EvaDav have implemented.

How to Create a Campaign on EvaDav Step-by-Step

I’m going to start the review by sharing the tracking tokens/macros to help you with faster and easier integration between traffic sources and affiliate networks.

Start by grabbing the macros:

The last macros are used to pass your conversions back to the traffic source.

To do this, in your tracker settings select EvaDav (or add it manually) and save the following:

First, just a couple of things about the structure I’ll use to describe campaign creation.

In EvaDav one campaign = one ad/creative.

And the campaign configuration is placed on one page only.

So, I had to take screenshots of every section and will show you them one by one, along with my detailed comments.

So first things first, click Create Campaign and fill in all the fields. 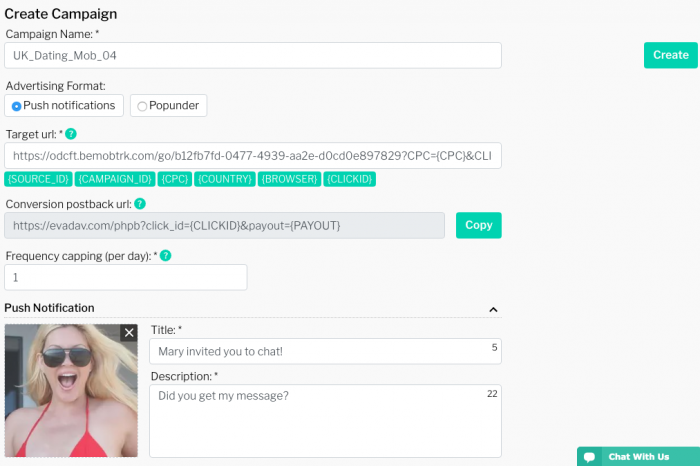 Campaign Name: speaks by itself

As I’ve already mentioned, popunder is a new ad format on EvaDav and it’s being actively tested by more and more media buyers.

Conversion Postback URL: an inactive field, serves as a reminder for Advertisers not to forget about Postback setup

Frequency capping (per day): how many times an ad is shown to the same user

Here we will add a creative. 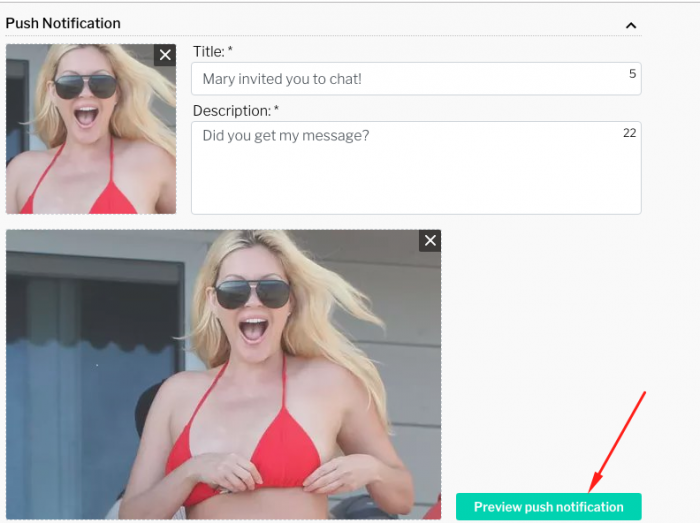 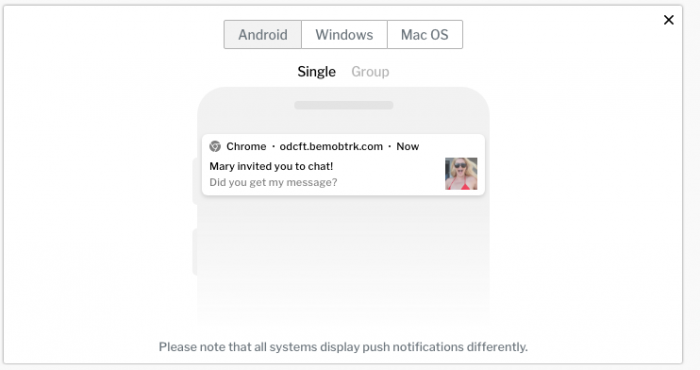 It’s super simple and clear: All you’ve gotta do is to add an icon, a large image, a headline, and an ad text.

Nothing new here, right? Just all the standard fields for push notification campaigns.

The images can be cropped/adjusted directly in the platform interface, so there is no need to prepare pics in advance. This is a plus when compared to other similar platforms.

Here you’ll select a country of your ad and a bid.

It’s worth mentioning that it’s possible to choose several countries and indicate a separate rate per each.

If you make this option, then countries will be displayed as shown below:

By the way, bid recommendations for each country are available in the CPC field and appear as a hint when you start typing any value there.

And yes, if you need to use city targeting you can do it on EvaDav, too.

In this section, we’ll set up campaigns targeting options:

Tip: I’d recommend you not to apply all these targets in the beginning of your campaign. Sometimes unexpected things might happen.

For example, while working with Sweden, I’ve noticed that I’ve got a good CR and sales from users with English language browser (although my landing page was Swedish).

There were even some conversions from Spanish and French language browsers. Few users with Arabic and Romanian browsers also brought me some clicks but no conversions, so I paused them later on.

Conclusion: start by selecting all languages ​​and pause some of them later on based on your stats.

You can select users who have recently signed up for push notifications. There is a chance that such users aren’t yet tired of push advertising, and could be more responsive to your offer. Such users are limited in number and thus your bid will be higher.

This is a cool and very useful feature that you should definitely try!

Start hour/Stop hour: Start and end time of the ads

Total Budget Limit in $: The total budget for your campaign in USD

Tip: always set limits for your campaign! This way you can be sure you won’t spend a lot of money on something that doesn’t work.

If I haven’t received a single conversion I’d have instantly get alerted that either my offer or creatives weren’t efficient. I wasn’t worried because I knew that the campaign had to stop on its own. And later on, I could’ve decided whether to apply some changes or stop the campaign completely.

On the other hand, if I obtain leads within 100 clicks I could increase the number of clicks or remove the limit altogether.

So far so good?

Let’s move on to the last subsection, which is Audiences.

This section allows you to configure the audience you’d like to work with.

The blacklists and whitelists are also created inside the Audience. I’ll talk more about this in the optimization section, so stay tuned!.

Finally, after all the subsections are filled out, the ad is created, the targeting is indicated, you can click the Create button and your campaign will be sent to moderation.

The moderation process is usually super-swift (even during the weekends since EvaDav’s crew work 24/7).

Actually, I’ve seen my first campaign approved while I was still setting up a second one.

After moderation, you may launch your campaign right away by just clicking on the “Create” button, as shown in the screenshot above, and hopefully, start seeing traffic arriving shortly after.

I ended up creating about 10 ads.

I left them running till the first conversions started appearing.

I happily waited for more sales and more data before beginning optimization.

Shall we get into that?

As you can see, I started with the Audiences section.

Here you can see the sources which might be used for blacklists or whitelists.

To create such lists, go to the Audiences section by clicking the Create Audiences button.

Then, specify a list name and IDs of sites (sources) separated by commas.

You can apply this list to any campaign you have on EvaDav, just don’t forget to mark whether it will be your blacklist or whitelist.

Tip: ask your EvaDav manager to help you out creating a Blacklist before you even launch your campaign. This way you can exclude sources that are not relevant for your topic.

It would be nice if all your numbers display inside your tracker, right?

Well, in EvaDav they do. That’s true!

Nonetheless, EvaDav provides some features which you can find effective regardless of using a third-party tracker.

So, once you’ve received enough clicks and leads, I’d recommend you to start by analyzing which campaigns/ads didn’t get you any conversion at.

Such sources should be the ones to be disabled first.

You can transfer them to the archive so that they don’t interfere with the sources in your general list. To do this, simply click on Move to the completed icon.

If you think that further ahead you’ll want to restore them, keep them.

However, I think it just looks cleaner if you mark them as completed and remove them.

After you’ve tidied up and got rid of what did not work, focus on what campaigns are performing well good and try to make them even better.

Go to the Statistic section and select the Campaign tab. 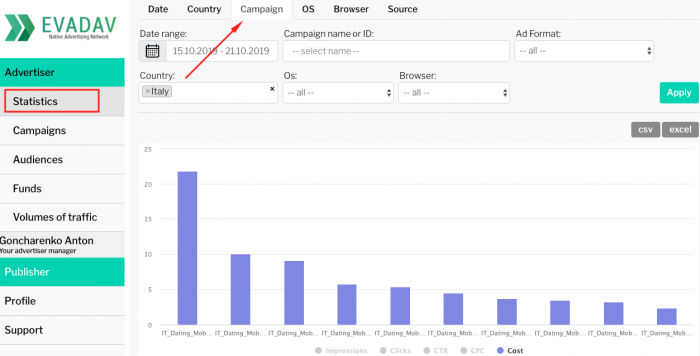 Scroll down and check data per Campaign. 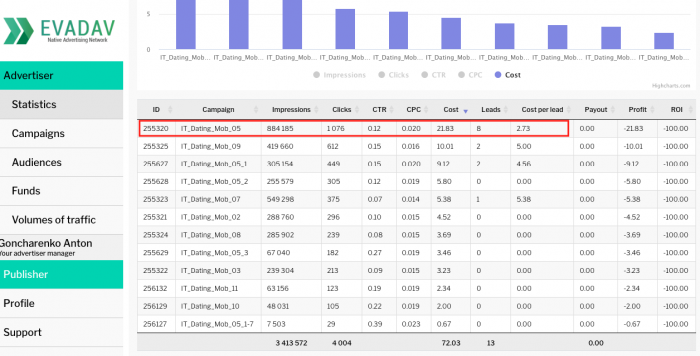 Let me call your attention to the campaign I highlighted above.

The math is simple! This campaign is profitable even without any optimization.

But it doesn’t mean that I shouldn’t bother with optimizing this campaign and juicing it up as much as I can!

As I’ve already mentioned, for this purpose, I should try to get a better understanding of what my audience is really into, and with that in mind, for instance, add more images and change the ad text.

Now, let’s move to the Sources Tab from the same Section.

Here, tick the sources which didn’t provide the expected profitability and add them to the Blacklist.

Take into account that all data you see on the screenshot above appeared there because I configured Postback with the affiliate network.

Thanks to this I could see my sales in the interface of EvaDav.

However, you won’t see a payout there because I just don’t feel comfortable putting out there how much I earned with the traffic source. Sorry, guys!

In a nutshell, I’d like to draw your attention to the advantages of EvaDav traffic platform:

These guys have a super user-friendly interface, which provides an easy-to-jump-in experience and causes no complaints from the user’s side;

They also provide a convenient layout of reports that makes analysis fast and efficient;

In addition, EvaDav Support does not fail to please you. They are fast and indeed helpful when you question them about traffic suggestions, optimization, and platform functionality;

Last but not least, EvaDav has great traffic quality! Their wide variety of sources let you choose the most suitable traffic for your offer vertical and, consequently, enjoy excellent turnover.

I have to admit that during my tests I liked traffic quality so much that I decided to continue running some campaigns and even started a few new ones.

The leads didn’t keep me waiting!

So don’t put off the tests!

Sign up right now, write to your manager and start driving traffic to your offers!