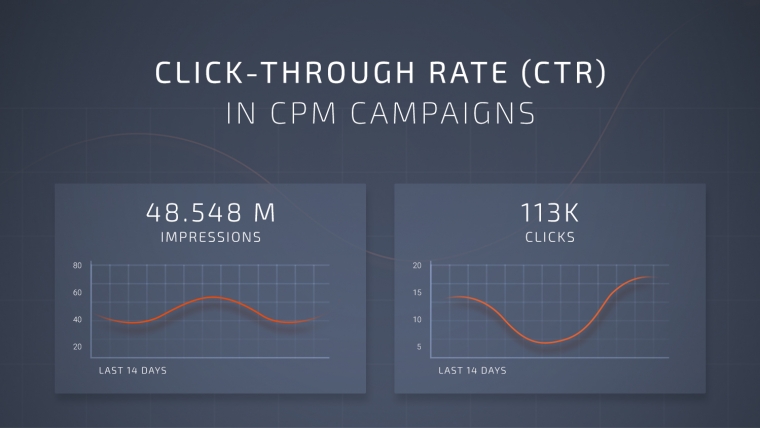 5 Aspects About CTR You Should Know for CPM Campaigns

We all know what Click-Through Rate (CTR) is and that it is an important value.

It is also important to add that a high CTR isn’t equal to a high Return on Investment (ROI).

In many cases, lower CTR creatives can result in higher profit.

At the end of the day, it’s all about how much you spend for traffic and how much money you make.

On the other hand, it would be a mistake to ignore CTR altogether and I would like to give you 5 reasons why you should definitely pay attention to it.

Some of the reasons are very obvious, some might be new to you.

Let me also emphasize that the following text relates more to CPM campaigns.

Some parts of it are also valid for CPC bidding but I wrote it with CPM in mind.

1. It Tells you Something About your Creatives

The higher the CTR the cheaper the traffic, this is pretty obvious.

Although it’s true that lower CTR banners will convert better than high CTR banners in many cases, there are certain limits you don’t want to go under.

Once the CTR is too low, you simply cannot profit if you are bidding on a CPM basis.

In case it is lower, it cannot turn profit and you need a better banner, because the traffic is too expensive for this funnel.

You can apply the same logic to any vertical or traffic type, once the cost per click or LP click goes over a certain price limit, it is not possible to profit.

2. It Tells you Something About your Competition

It’s a common fact that the first banner impressions result in higher CTRs than the last ones.

Users are more likely to click on the first few banners that they see.

Once they are on a site for a while, users start to ignore the banners more and more.

So the first few banner impressions are more valuable not only because of the traffic quality but also because they can bring higher CTRs and lower the final CPC.

I’m sure many of you have seen a scenario where increasing the bid resulted in a big jump in CTR – that’s when you finally got high enough in the bidding chain to get your hands on the first few impressions per user.

In order to get the most of a traffic source, you need to learn to spot these breaking points and try to get past them whenever the bid still isn’t too high for you.

Once you can get there, the CVR usually improves too and the campaign becomes more stable due to the improved quality.

3. It Tells you Something About the Spots/Placements

The CTR of creatives will tell you a lot about the placements you are buying traffic from.

Is the CTR too low?

The ads are probably buried somewhere deep below the fold, or there might be something wrong with the site – low organic traffic, something fishy going on with the traffic distribution…

Is the CTR too high? There might be a BOT problem and it would be a good idea to run a bot test on this placement.

The test didn’t show anything strange?

This means the banner is placed in a prime spot or the placement has awesome traffic – one way or another, off to a whitelist campaign with that spot and squeeze it as much as you can.

Did you suddenly lose CTR on a spot that has been killing it?

4. It Will Tell you Something About your Angles

Split testing several angles and some are giving you high CTR on some placements, but they suck on others?

And different angles perform exactly the other way around?

When using a “blind” traffic network, you don’t have many options to target by interest or niche, but the CTR will tell you which placements are more compatible with what angle.

In case the data speaks clearly enough, you can create whitelist campaigns based on this and target specific placements with a specific type of angle.

This can be very useful when going after pockets of profit with a very high ROI.

Combine it with the high CTR approach in point #3 and you can reach insane ROI.

The volume will be lower for sure but the returns can be awesome.

5. It Will Tell you Something About the Vertical you are Pushing

Testing tons of creatives, driving the bids to the sky but you still can’t get a decent CTR?

You’re most likely trying to push a vertical that this source or large placements don’t respond well to.

This happens a lot with verticals that require a specific audience.

In case you are not able to properly target it, the CTR will be low.

Therefore, this offer is not suitable to be pushed to a broad audience.

This is why broad appeal offers like speed boosters, antivirus, general sweeps are the most popular with blind networks.

As you can see, even though CTR isn’t the most important factor to watch when optimizing campaigns, it can tell you a lot about your campaigns.

As always, nothing in this world is black or white only.

You need to learn how to read between the lines and use this to your own advantage.