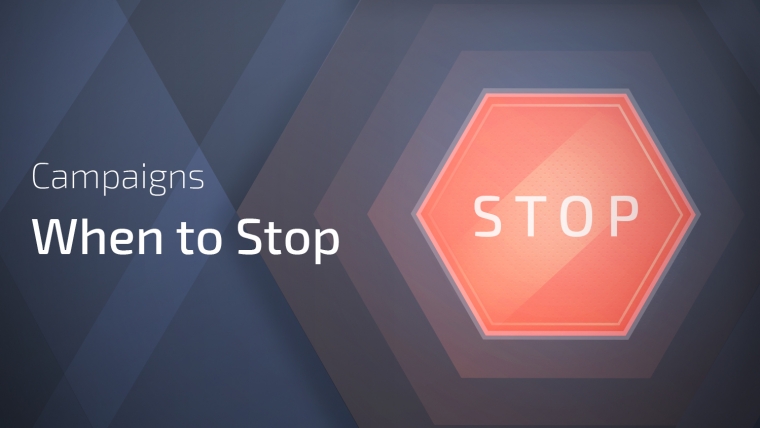 Media Buying is a world where you should never give up.

This is a tough arena to play in but you’ve gotta remember:

There are different strategies to optimize your media buying campaigns.

Giving up – in such a competitive yet super addictive field – should never even be an option!

However, facts are superior to the will of us media buying players.

Sometimes, once you’ve tried everything you possibly could, it’s time to throw in the towel.

Indeed, there’s a time for you to look at what you’ve got and understand that it’s best to just stop a media buying campaign.

Why is it so important to stop media buying campaigns?

Let’s get some numbers and explanations up in here, okay?

1. Few Conversions May Lead you to Hope for More

Campaigns with a low cost and a low number of conversions are dangerous.

Because you start thinking that the daily costs are low which means you really believe there’s room for optimization.

In fact, you realize there’s nothing harmful in just keeping the campaign running.

This is a huge mistake, though.

There’s probably no way you can optimize that hellish low-cost campaign.

Moreover, if you spend a whole month optimizing a single campaign you’ll be shocked by the amount of cash you’ll burn. Easy.

2. Hoping for a Conversion

In case your campaign doesn’t have any conversions and it’s just spending a few miserable cents per day, you may start feeling you should keep the campaign running just because you can.

Again: another mistake! In fact, you’ll be pushed into waiting around for a conversion to burst in and guess what?

You may start losing money like crazy before you notice it!

3. The Sum of All Parts May be Large

If you add the costs of the “low costs campaigns” that are active, you may have a black hole in the monthly result. Just saying.

4. You May Wanna Invest the Money Elsewhere

This is super common.

The money you were spending in a slowly-dying campaign can be used wisely by creating another campaign that showcases more volumes and a more ambitious potential to make those pockets feel fat!

5. You Feel Like you Need to Reset the Whole Thing

Sometimes you’ve gotta annihilate to create from the ashes.

It seems obvious that there are times when it’s just impossible to optimize.

You may keep trying but you’ll never succeed.

My professional (and charming) advice?

Stop the campaign and create something from the ashes! Rise like the phoenix!

There are some cases where a white list containing only the best websites may be your solution.

If you want to learn more about whitelists don’t waste time and check this case study.

Now you know the reasons!

As you can see, the number of different reasons to throw a campaign in the dustbin are the proof of how interesting this biz really is!

But this ain’t all!

These are cases when – even though I’ve performed the best optimizations possible – I couldn’t get that saucy cash I was yearning for.

When you get yourself in that kind of a messy position, the best thing you can do is use your squashy brains.

Indeed, you’ve gotta be rational and accept the circumstances.

Ready for some case studies?

I launched a campaign on ExoClick.

Even though I was playing with the highest quality traffic available, I only got a few conversions.

The first example is one of the most intuitive ones.

You created a campaign.

Now, you’re aiming for the first position with a high bid but no conversions have been registered.

When should you decide when to stop?

The case I picked is clear.

The segment is Indonesia – Indosat, a campaign on ExoClick.

Over the following 10 days, only one conversion was made.

Should I optimize the campaign?

It seems obvious that I already spent 2.80€, 9 times the payout.

With only one forgettable conversion, there’s no room for optimization.

Let’s analyze some of the optimizations I normally perform to a campaign:

When should you stop the campaign?

Here’s what you must never forget:

For each campaign, it’s crucial that you gather as much info as possible.

I’m alluding to aspects like conversions and costs distribution.

To gather this info, you need to leave the campaign running for some days.

More specifically, it should run through the most active days:

I left the campaign active until September 12.

I was gathering data from two weekends but it was more of the same.

I’ve analyzed twelve days (including two weekends) with 3.39€ of costs and one single and wretched signup.

This is a no brainer!

I need to stop the campaign!

The segment has a low amount of traffic.

This one’s similar to the previous case but it has remarkably low traffic.

The segment is Paraguay – Claro.

The payout for each conversion is 0.07€.

I’ve set a high bid in order to get the highest quality traffic.

Even so, the amount of traffic is almost residual. 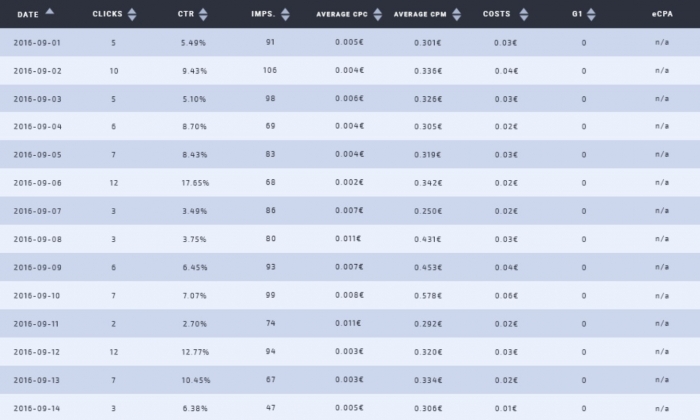 No good news coming from that side of the fight.

Plus: no conversions at all.

Similar to the #1 example, there’s no way I can optimize this.

Having already spent 6 times the payout of the segment without any conversion coming my way, the answer is easy and painful.

The campaign has to be stopped. Such is life.

There’s a large difference between the revenue and the costs.

Optimizations have been tried before and I just can’t reduce the large gap.

The campaign’s segment is Thailand – AIS in ZeroPark.

The costs are heavy due to the large number of sources/targets which normally exist in the ad network.

The campaign has been active before but the results weren’t the best.

You can see for yourself by taking a look at July 11.

I then aimed for a higher bid so as to have better-quality traffic.

The costs increased and the traffic had a slight increase on the number of conversions which is visible on the revenue.

Nevertheless, the revenue didn’t grow as much as the costs.

I tried cutting the sources/targets which were spending more than twice the payout in the next active campaign days.

I continuously attempted to reduce costs. Unfortunately, the gap between revenue and costs didn’t become smaller.

I tried both lower and higher bids.

I stopped what was harmful.

Even so, this campaign isn’t worth the work.

Therefore, I decided to cut it.

It’s not all bad news, though.

I used the best targets, created a whitelist, and became profitable by more than 5€ a day, on average.

This is an example of how you can stop a campaign while being able to create something new and much better from those decayed media buying ruins!

There’s a competitor who’s stable in his position.

The case is for an Ero-Advertising campaign in the segment Brazil – TIM – CPM campaign (it’s similar to a whitelist).

The campaign started with almost no traffic at all.

Someone could obviously afford a high position, which basically left almost no traffic available for the other disappointed competitors to play with. 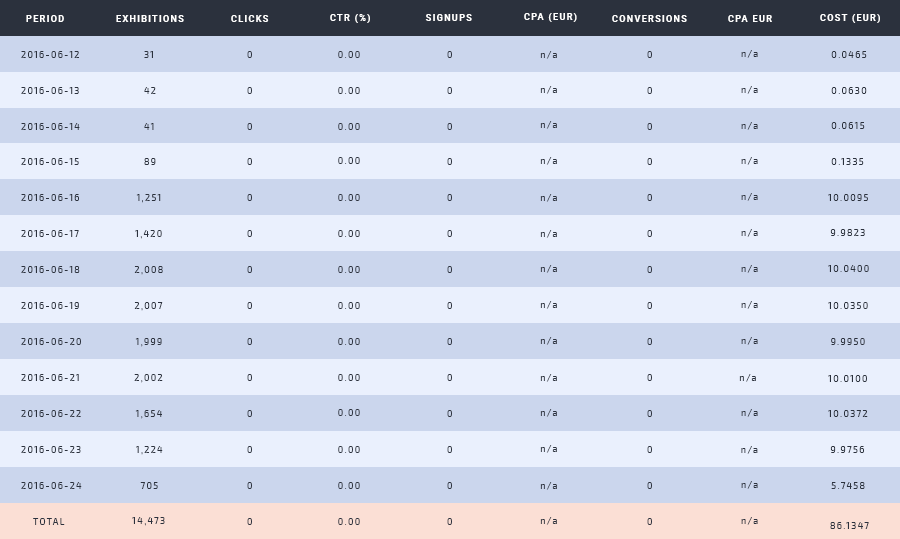 I increased the bid over the following days and the volumes increased a lot.

The costs also went up but the revenue didn’t increase at the same rate.

I decided to hold the position for a few days but the revenues decreased.

I couldn’t perform any significant optimizations to increase performance.

That’s why I lowered the bid again on June 23 to make the competitor pay some more. 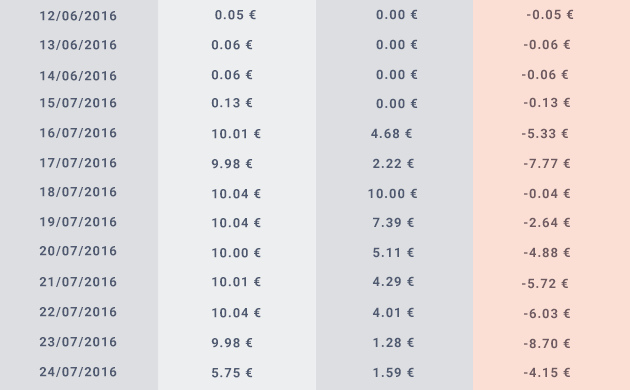 What followed was very similar to what happened the days before the bid increase.

It’s obvious that the competitor is comfortable in that position and that he wasn’t willing to leave the campaign for others to rule.

This means that I’m screwed.

It doesn’t matter what my position is.

I’ll always have a bad performance so there’s a strong need to stop.

There are several explanations for the fact that he had a better performance:

He gets a better CR and probably a better CTR because he checked one or more of the following options.

In these cases, I recommend you talk with you account manager about the campaign.

Due to the fact that there are single offers that may fit your needs.

Should I immediately stop a campaign everytime results are in the red?

The answer is NO!

It’s fundamental that you’re able to understand that the rule is simple: information = power to change/optimize.

The segment is India – Vodafone in Traffic stars.

The payout is around 0.50$. The next table shows the campaign was going positively smooth from October 6 to October 9.

The costs increased a day later because there was a larger amount of traffic arriving to the campaign.

The number of conversions followed an opposite trend because there was probably a drop in the offer.

The campaign became negative on the following two days.

You can see it by looking at the eCPA in the last column. 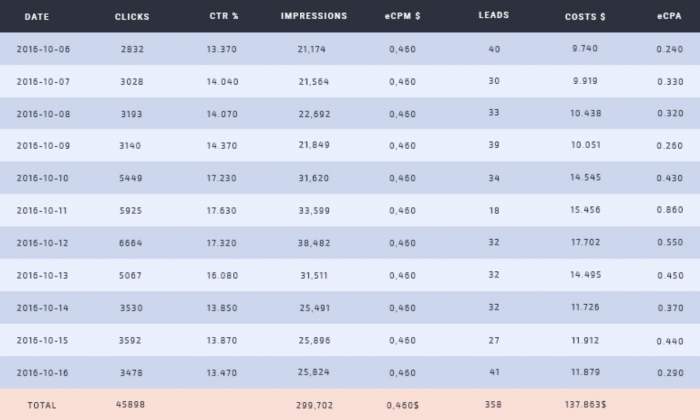 What should I do? Pause the campaign?

As you can see, this is a very different case from the ones above.

There are lots of conversions and you have the power to optimize the campaign.

It’s what I have done.

On the 13th, the campaign was already positive.

On the 16th, the campaign was a freaking amazing gold mine!

I hope this post has helped you understand how important it is to control the different campaigns you run.

Keep being focused on the money train and never forget to analyze thoroughly so as to have a smooth optimization process that actually makes your profits go high up in the starry sky!

Always pay max attention to those cruel campaigns that can really poison your media buying activity and ruin your life!