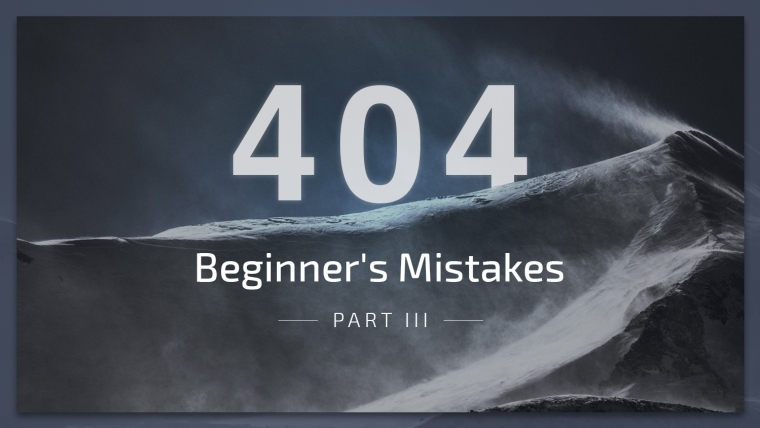 Here we are, back again, with yet another part of the renowned Media Buying Mistakes series!

In case you’ve missed Part 1 or Part 2 of our Media Buying Mistakes series you can go for it now.

This time around, I’m here to show you some of those stupidly common mistakes made by eager people who are only just taking their first junior steps in this fierce game!

Shall we start? Let’s go!

This is for real, brothers and sisters!

You can’t expect to make money on the first day without any investment.

Trust me: one of the most common and seriously wrong ideas people may have is that they only need to get started and BAM, money starts pouring like a waterfall in monsoon season!

It doesn’t work like that, at all! You’re not gonna launch a few campaigns and start stacking money like crazy.

Honestly, if you look at it rationally, you’ll quickly realize it can’t possibly be the case, right?

If it were to be real, wouldn’t we all be super rich millionaires sipping Dom Pérignon without working another boring day?

I thought so. For you to start making real money in this game you need a lot of things that have already been explored in many other articles in the Mobidea Academy.

Even so, I wanna get you focused on the investment aspect of the media buying experience, okay?

One of the cornerstones of affiliate marketing campaigns is the necessity of properly collecting data, analyzing it and making decisions based on that accurate and thorough analysis.

In order to correctly collect data, you need to pay for it, right?

This is this the whole point of this topic: you can’t expect to have decent decision-making info if you’re too frightened of wasting some precious cash.

Indeed, once you set a budget and let the campaigns run, you’ll be able to analyze and probably set some parameters such as a placement or a device, for example.

You’ll see that they’re profitable to you and that’s when you notice that green money light flashing at the end of the tunnel.

Of course, you can be very lucky.

Sometimes. In fact, you can nail a good campaign right from the first days.

However, that dream is pretty unlikely and, again, it will be sheer luck.

If you wanna be consistent and make some real money, you can’t think about counting on getting lucky every single time.

That’s the reason why you’ve gotta get data and invest that money!

The prize of investing and spending time analyzing data?

Maybe you’ll make it rain so wet that you won’t need to analyze data ever again!

Sometimes newbies want to put everything into a campaign.

Why the heck would they do that for?

Because – for these inexperienced bees – the higher the volumes, the better the honey!

This statement – however – is far from reality.

Let’s get to the point: you don’t mix mobile and desktop traffic.

Why shouldn’t you mix mobile and desktop traffic?

The same exact ones that have been stated above.

You could really destroy an otherwise potentially profitable campaign by mixing olive oil and water!

You can’t be callow or you’ll risk wasting a ton of cash and moving back in with your parents.

We both know your parents don’t deserve another round, don’t we?

I guess you just need to choose your battles wisely:

Don’t start in tough GEOs when you don’t have enough experience, for example!

Then you use your eyes to see that Switzerland and Belgium present some very high indicators, such as those sweet EPCs.

Great! What do you do, then?

You get all excited and launch a bunch of campaigns in those countries, right?

First of all, those types of countries are super expensive.

This means that the parameter of what a high EPC is for them can’t be compared proportionally to a tier 3 country, for example.

The volumes won’t probably be that high, so you have to spend quite some money and time to be able to gather proper data.

Moreover, even the task of interpreting the data is gonna require a high degree of proficiency in the game.

Is it possible to make a lot of money in these GEOs?

No. Especially for newbies.

You’re gonna be better off trying GEOs where you can have high volumes in a shorter period of time without spending all your budget.

Learned something from the guitar master, didn’t you?

Don’t expect to make it if all you do is copy others!

Don’t get me wrong.

Ripping landers and creatives is normal.

I guess we’ve all been there, at least once or twice.

What makes it harmful is constantly copying exactly what other people are doing and expecting to get amazing results.

It has been seen, done and experienced before.

In this game, you either get creative or you get moving!

If you’re lucky, this copycat balderdash can even work for a short while, but it’s quickly gonna get saturated.

This doesn’t apply only to creatives, but also to those well-known follow-along articles and guides you can find in forums.

Again, you can use them to get some knowledge, but trying to just replicate what’s in there isn’t gonna be your smartest decision, considering that hundreds of other people will probably be doing the same.

Use these strategies wisely. How? You can rip landers, for example, and then twitch them.

You can try many different angles and find out what you can do to have the edge you’ll need to really reach amazing results.

The same with forum threads.

Indeed, you can get some tips from there, but don’t restrict yourself to try to replicate what’s there, or else you’ll be just another one in the crowd.

Additionally, the guy who posted that info you’ve read online is probably already making money in a different way and just posted for that very obvious reason.

Or do you think he just happens to be a competition junkie?

Give me more competition!

Yes, that’s the fix I need!

Give me a break!

The ones that are too premature are the ones who go home crying to their moms!

This is one of the most common mistakes.

I see guys who make this mistake so often they all look the same to my tired eyes.

You don’t need to have a PhD in statistics to understand the meaning of statistical significance.

Meaning that, in case you don’t have enough data to definitely conclude a certain parameter is bad (or good) you shouldn’t make rash decisions.

It’s always the same story with these guys.

In fact, one of these nefariously naive fellows decides he should start a campaign.

That same day, without any reliable data, this hypothetically moronic donkey feels like cutting parameters all over the place.

You should leave the campaign running – and yes, probably spending budget – for at least 24 hours to really get a more consistent idea.

This time frame can vary and be a lot higher, depending on the country.

In your campaign’s stats, you’ll see that most of the parameters will be correlated.

This means that a bad performance for a website, for instance, can be mainly caused by a very bad performance of a device that converted on that website, and of course the other way around.

Here’s the moral of this story:

Due to correlations, you shouldn’t cut everything at once.

Cut the most obvious and crucial parameters.

Then, wait to see the results and effects that decision has had on your performance.

Only then should you think about trimming the campaign, adjusting the parameters, and getting that optimization getting real smooth!

That’s gonna be all, folks!

I really hope you can learn from these common mistakes.

The idea is simple:

I want you to not be the kind of silly Jackson who makes mistakes that can be easily avoided.

You know what they say:

Learning from other people’s mistakes is always smart and probably pain-free.

That’s why you should keep these tips in mind.

I’m sure your road to success will be a lot less bumpy and with fewer regrets.

Let’s keep trying to pave this road with gold!